The Boy Who could See Demons – Carolyn Jess-Cooke
Hachette – Available May 2012
A startling look into the curious workings of the human psyche and the darkest places it can take us, perfect for fans of ‘The Six Sense’.

I loved the characters that create the duel dialogue of this novel, first and foremost is 10 year old Alex, the star of the story who is wonderfully warm, funny and so caring of his severely depressed mother Cindy…he also happens to be best friends with a Demon – Ruen.
The other half of this tale features Anya, Alex’s psychiatrist who’s interest moves beyond professional when Alex’s case becomes a stark reminder of her own troubled daughter Poppy’s who died 4 years previous.
As Ruen makes his presence known Anya finds herself questioning her diagnosis and her belief in the reality of personal ‘demons’ and their role in the suffering and temptation of our race. Which poses an interesting question…can the baser level urges of suffering humans – such as depression, greed, self-hatred and harming really be fuelled by lecherous nether realm demons?? That I will let you read and decide – its well worth discovering!
Posted by Amber Petith at 4:35 pm No comments:
Email ThisBlogThis!Share to TwitterShare to FacebookShare to Pinterest
Labels: Carolyn Jess-Cooke, The Boy Who could See Demons

Teen Romance based in reality.

Don’t let the author’s name lead you to believe that this is a story of sunshine and bunnies. True there is an epic love story at work but it is nestled between real life problems of broken families, domestic abuse and each characters own feelings of alienation.

Park is the only Asian kid in a middle America white-bread town and like the opposite of what everyone else seems to be into, enter Eleanor, larger than average with curly red hair and a flamboyant dress sense spawned from wearing whatever has the least holes in it from her woeful poor wardrobe.

Eleanor’s shattered family life is slowly eclipsed by her growing feelings and time spent with Park and his loving family, drawing her out of her shell and helping Park to see the love he already has with the acceptance he thought he needed.

Reading the character growth and blooming love and lust (don’t worry all G rated) of these well drawn characters is entrancing and all consuming. However if your after a tale with a neatly tied up ending then this isn’t the book for you, trust me – you’ll find yourself wanting more.

Posted by Amber Petith at 5:44 pm No comments:
Email ThisBlogThis!Share to TwitterShare to FacebookShare to Pinterest
Labels: Eleanor and Park, Rainbow Rowell

Bloodrose – Andrea Cremer
Hachette: Available NOW in all good bookstores
“I’d always welcomed war, but when the last battle ends, what life is left for a warrior?” 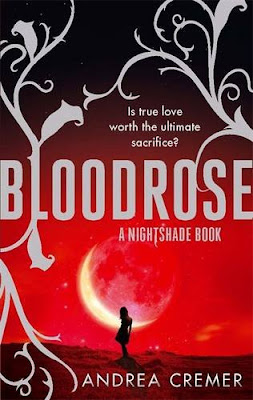 Wow, just wow. I don’t think this series could have ended more differently than I had imagined – naturally I won’t give away the surprise, suffice to say I'm not sure exactly how I feel about the final developments….Happy – yes, Sad – yes, elated, devastated, confused yet assured and overall nostalgic for the way things were.
The final battle may have been fought but what is the price you would be willing to pay to banish evil for good?
There is one thing that I do know for certain – I’ll miss Calla and her pack, there really isn’t another story like this one!
Posted by Amber Petith at 7:57 pm No comments:
Email ThisBlogThis!Share to TwitterShare to FacebookShare to Pinterest
Labels: Andrea Cremer, Bloodrose

The Lifeboat – Charlotte Rogan
Hachette – Available April 2012
In the summer of 1914 a mere two years after the tragic sinking of the Titanic the Empress Alexandria suffers a mysterious explosion and sinks beneath the waves.

One of the few to escape disaster in Grace Winter, 21 years old and newlywed -  in a state of shock she finds herself being lifted into the comparative safety of one of the remaining lifeboats and thus begins the striking tale of her survival against the harsh and unforgiving sea and the baser tendencies of humanity of those around her.
As the days and weeks Stretch on conspiracy, jealousy, dependency, bigotry and weakness slowly consume the 39 passengers aboard the Lifeboat briefly highlighted by moments of compassion, strength and self-sacrifice. But even so rescue may not be the only thing needed to save Grace.
Grace is a  character that I was equally intrigued and irritated by and this is an original debut with an authentic voice however I would have liked a more conclusive ending, but I suppose that said unpredictability and adventure is the very nature of life itself.
Posted by Amber Petith at 7:25 pm No comments:
Email ThisBlogThis!Share to TwitterShare to FacebookShare to Pinterest
Labels: Charlotte Rogan, Lifeboat

Aye, it's set in Scotland!

Our story begins with the dubious return of Stewart Gilmour to his costal home town of Stonemouth, Scotland after being unceremoniously run out of the Toun five years previous. Waiting for him are his Family, Friends, old flame and old life that is familiar and relieving as much as it is disappointing and diminished in his opinion. However also lying in wait are the Murston Clan – the reason behind his running and even though Stu is back in town to pay respects to the recently departed Grandfather Jo Murston they seem to be having some trouble putting the past in the past and some still crave retribution…
Despite the somewhat ominous feel often delved into, the story is still incredibly entertaining and filled with loveable characters and that brilliant Scottish brogue (I swear the highly versatile word ‘Aye’ has now worked its way into my regular vocabulary much to the amusement of my friends and family).
It is wonderfully nostalgic and witty as well as quite lyrical when Stu describes his beautifully troubled town creating a funny, touching, relevant and generally uplifting read!
Posted by Amber Petith at 7:22 pm No comments:
Email ThisBlogThis!Share to TwitterShare to FacebookShare to Pinterest
Labels: Iain Banks, Stonemouth
Newer Posts Older Posts Home
Subscribe to: Posts (Atom)