Twins, but not as you know them...

Humans have colonised into the deep reaches of space and this tale is set on a relatively new terraformed planet named Sekoia – a society that looks picture perfect on the surface but harbors a treacherous secret. Enter our protagonist Lissa who has been suffering for years with attacks of phantom pain, not her own but her twins. Separated at birth, Lissa has no idea that the echo of pain she feels is coming from the real experiences of her twin.
As you can imagine the story really heats up when Lissa finds the truth, and her sister but while on the run from everything she knows and loves Lissa finds a newer stronger version of herself, re-assessing her life and the people in it, who she can trust and who it turns out she cant. 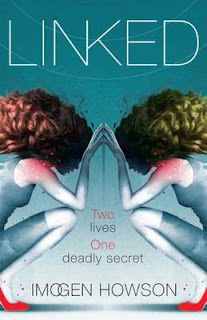 This is a fast-paced and exciting debut with a solid and interesting storyline, I really enjoyed the world/technology and the main characters with their different moral struggles and growth from beginning to end which I feel is rarely portrayed well in YA novels of late. I especially loved the way Imogen ended the story with good resolution yet a compelling set up for book two – which I definitely plan to pick up!

Posted by Amber Petith at 3:21 pm
Email ThisBlogThis!Share to TwitterShare to FacebookShare to Pinterest
Labels: Imogen Howson, Linked, sci-fi, YA