A Love affair with India

Let me start by saying that I have never been enamoured with India so, a story that is set in large part in India didn’t really thrill me to pieces... I also must admit that the main reason I picked up this particular story was due to the gorgeous cover and those piercing eyes of the Tiger (yes I have been known to judge a book by its cover, sorry). That said, I came to find the storyline inventive and exploring the myths and legends of India’s past gave me a glimpse into the beauty of the Indian countryside (they do a lot of trekking!), the people and in particular the faith.
Now to the storyline: Our adventure kicks off when we meet Kelsey Hayes a self described ‘average’ young woman who has just graduated from high school and looking for a summer job before a start at college. We also learn that Kelsey is in the care of a lovely couple who are her guardians having lost both of her parents in a car accident and her grandmother a few years previous. 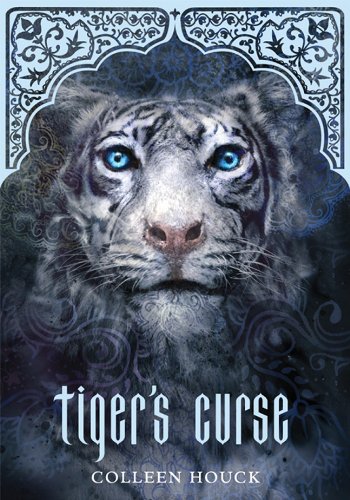 Enter a two week stint at the Circus that just rolled into town, here she meets Dhiren the circus's mild mannered white tiger, Kelsey starts to work closely with ‘Ren’ providing his meals and watching as he is trained, naturally her fascination is this awesome animal grows and she finds herself spending all her free time providing him with company while she chats and reads to him. As her time at the circus is winding down the owner is approached by a well mannered Indian man Mr Kadam who wishes to purchase the tiger for a large sum with the hope to release him in a Tiger Reserve in India owned by his wealthy boss. He also requests that Kelsey accompany Ren to smooth his transition (all expenses paid of course) as his trainer Mr Davies cannot leave the circus for such a large stint of time. Naturally she agrees and I spent the next few chapters waiting for the proverbial penny to drop, and drop it does....
It turns out that Ren is in fact an immortal prince from a time long past that was trapped in the body of a tiger, only able to change back to human form for 24 minutes in each day and Kelsey holds his only chance of breaking the curse and returning him to human form for good. While Kelsey struggles to coincide her tiger with the charming man he keeps turning into and her resulting (and not at all one sided) emotions they must also do battle with ancient forces hell bent on keeping Ren trapped as a tiger forever. Colleen originally self published this as an e-book on Amazon where it was understandably snapped up by many avid YA readers after which she was approached to publish. You can certainly feel that this is a debut novel with the story starting out something like a diary entry, however as the story grows so does she as she finds her feet. I am positive book 2 and beyond will see her flourish and I will certainly be picking up them up!
Tiger's Quest (Book 2) Also available June 2011.
Posted by Amber Petith at 6:58 pm
Email ThisBlogThis!Share to TwitterShare to FacebookShare to Pinterest
Labels: Colleen Houck, Tiger's Curse